Getting to this a little earlier this week. Since I decided to set further revisions on Chasing the Ghost aside until next month, I have more time to focus on new writing. So, I raised my daily goal from 3k to 5k. And that I split in half, so I write the first 2500 first thing. Then, I’ll get chores and blog reading/writing, email, goodreads, pinterest stuff done. Then, I’ll write the other half of my words before I worry about fixing dinner/crafting(which I’ve gotten none done yet this week). This seems to be working well for me so far this week. Of course, we’re only 2.5 days into the new routine.

It also helps that I was awake at 3 this morning(ok, 2:30, but I didn’t get out of bed until 3). So, I had an extra hour+ to get some words done. I made my first goal before 7:30. It’s a little more than an hour later and I have almost all chores done(waiting for laundry to be done in washer to throw it in dryer then fold it). So, here I am working on my blog post.

It’s Wednesday, so time for another snippet from Some Fools Never Learn. I’m a little more than halfway through this. So, still hoping I’ll be able to finish the first draft next week. For today, I have 11 paragraphs+a bonus sentence at the beginning. For context: They’re at Nolan’s(1 of Tate’s younger brothers) wedding. Jess(Tate’s sister) is talking to Emilia. She’s the second youngest, and about 15 years younger than Tate.

“I came to talk to you, though.”
“About what?” The tone in her voice put Emilia’s nerves on edge. She didn’t understand it, she’d never done anything to the other woman. So, why did it feel like Jess was poised to attack.
“My brother.”
“You may want to be more specific. Or do I get to choose between them?”
She’d meant it as a joke, but since Jess’s face pulled tighter into a scowl, it obviously hadn’t gone over well.”
“You know perfectly well just which one I meant. And you’d better not be trying to go after any of the others, either. Nolan and Jace are taken. And Kelan’s dealing with his own shit. You need to-”
Emilia held out her hands. “I was joking, Jess. I’m not like that. I don’t know what gave you the idea I might be.”
“She was. Still is, the cold manipulative bitch.”
Emilia narrowed her eyes then it came to her. “You’re talking about his ex-wife.”
“So, he has told you about her.”
“Some,” she admitted. “He told me she cheated. And I know she dug her claws deep into her. If you think I’m like that-”
“I don’t know, do I? All I know is he’s getting awfully wrapped up in you. Rebekah is the only one who’s ever done that to him before. And I don’t want to see him get jerked around again. I want to like you, because it’s obvious he does. But, I’m not a little kid this time. I don’t have to just stand around when I see someone hurting him.” 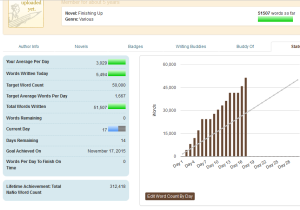 This is the fastest I’ve ever finished NaNo. 17 days, with only 12 of those actual writing days. Last year it took me 19 days, with 15 writing days. I’m still going, of course. And can’t officially “win” until Friday. But, still exciting.

More red than I’d like there, but hopefully by Sunday it will be mostly blue.

WeWriWa: “All This Time”