Earlier this month, I decided I wanted to make something for my nephew who was turning one. I looked through the patterns I all ready had, but nothing stood out to me. So, I did a new pattern search on Ravelry and found this one. Thought it was really cute, so decided to try it. This one knitted up pretty quick so I decided to make it a friend as well.

A pair of turtles

Then, just a few days after I opened for business, I got a request to make a ninja turtle hat. I couldn’t find a pattern for a knitted one(although I did find one for a crochet hat), so after looking at some pictures I came up with an idea of how to do it. After working out the details, I started on the hat. I had planned on getting the money before starting on a project, but since I had not done one like this before, I wanted to be sure I could do it before taking any money. It only took me about 2 days to finish it. I was pretty pleased with it since it actually turned out pretty much the way I had pictured. 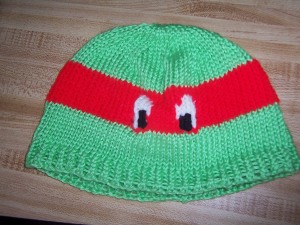 The customer wanted something a little different though(mask a little lower and wider with wider eyes). So, I started on another one and made some adjustments for what she wanted. And I think the second attempt turned out even better.

Making this hat did give me some confidence that I can make my own designs, instead of just following someone else’s pattern. I have some ideas now for other hats as well that I’m hoping to make.

This is something that’s been on my mind for a while now. Neither of my children really look like me. They both seem to have gotten blonde hair and blue eyes from their father. Every time we go somewhere, we hear how much Nathaniel looks like Cory, although when he was first born he looked just like me when I was a baby. Their personalities though are a different story.

Hayleigh is me. That’s really all there is to it. She is like me in so many ways, it’s almost scary. She’s overly sensitive. One little thing will trigger a meltdown. Or a tantrum. She’s beyond shy. She would rather play by herself(or spend time with an adult) than with kids her own age. When we had trouble getting her to stay in bed at night(just until she fell asleep, once she’s sleeping she’d sleep all night. It was just a matter of getting her there), I started letting her take books to bed and it basically solved that problem. As long as she has her books she’s out within half an hour usually. No matter what time she goes to bed, she is up early(unless she’s getting sick). Like I said, so much like me, and that worries me sometimes. I don’t want her to struggle with social interactions like I do. I don’t want her to think she’s less because she doesn’t act like everyone else. I certainly don’t want her to think she has to act like everyone else just so she can fit in. At the same time, it makes me realize what I probably put my mom through. And I wonder how much is in environmental and how much is just passed on. Is it because she never really did socialize much as a baby/toddler? Which I can’t help but feel is my fault because I’ve given my social anxiety issues too much control. Is it because of her other delays? Or is it just her personality?

Now my little monster man on the other hand…I don’t see any of my own personality in him. No, he definitely takes after his father(which he says quite often himself). Once he gets comfortable somewhere(less than half hour usually, unless he’s tired), he’ll go up to anyone. Doesn’t show the same discomfort around people that Hayleigh has. I was reading to her from the time she was about six months. Still haven’t started a bedtime reading routine with him. I’ve tried, but he just won’t sit still long enough to even finish a short board book. With her, we only had to tell her ‘no’ a few times and she’d stop doing whatever it was. Not Nathaniel. Move him away and he goes right back to it. Tell him no, and he shakes his head as he goes back to it.

So, how can two kids be so different when their early environment has been the same? What I keep coming back to is that we’ve passed on our individual personalities to them.

Stole his sister's bike when she was distracted by a cartoon

Having a tea party with her doll

Workout on Monday & Tuesday: Worked out on Monday, but my hip was feeling a little sore again on Tuesday so decided to rest. Was going to get back to it today, but feeling crappy and hip is still bothering me a bit. I’ll get back to it when I’m feeling better. Still haven’t had any pop yet this year but snacks haven’t been too healthy but I haven’t been snacking a whole lot either.

This is the usual situation in our house: the thermometer reads around 65 degrees even with the pellet stove running. And there is my son, running around with no socks on. Usually within five minutes of putting them on him, he has ripped them off again. Of course, I rarely wear socks so he’s not the only one sockless around this house. And the cold feet do not seem to bother him.

I started looking for sock patterns last weekend, hoping to find one that would be more difficult for him to get off. I had a skein of sock yarn that I had bought without a specific project in mind for it. So, Saturday I started knitting him a sock. I didn’t think it would take too long, but by the time I usually go to bed, I had only managed to do the leg part. I decided I would do the heel before going to bed. I never got there until about 1:30 in the morning. Then, I spent the next day finishing the rest of the foot. By the time I had the whole sock done, I had spent about 15 hours total on it, and he was in bed for the night. Fifteen hours is longer than it takes me to knit a hat or a bib, and that was just for one sock. There was still another to make.

On Monday, I tried the sock on him. I wanted to make sure it fit before I attempted the second one. The heel did not look quite right, but it did fit him. And he left it on for about half an hour. The second time I put it on him though, it did not last even five minutes. So, I decided I’d try something else instead of making the other sock. I had a pattern for some “baby” booties that came in several different sizes, so decided to try to make a pair of them. Just had a little trouble with the first when it came to joining it at the toes. Once I figured that out, the rest of it was a breeze. I made a pair of them in less time than it took me to knit one sock. Of course, he doesn’t keep them on either. So, I guess he’ll remain sockless until the weather warms up. And then it won’t matter anyway. And now I have some new techniques under my belt.

Since finishing the first draft of Guarding the Heart on Wednesday I haven’t done any writing. I turned off my morning alarm for the rest of the week. It’s back on now, so I can get back into my routine this week.

Haven’t read any more of Self-editing for Fiction Writers. Did start another novel though, Indulgence in Death by J.D. Robb.

Haven’t done a lot here either. Commented on a couple blogs, but that’s about it.

I’m only about 1 lb away from my goal weight now. Still haven’t had pop. Decided to take Thursday as a rest day from exercise and woke up Friday with a pain in my hip so decided it would be better to rest until it felt better. Worked out this morning(with some “help” from the kids) and hip didn’t hurt, so I’m going to try to do a 3 days on/1 day off schedule for my workouts.

Finish Guarding the Heart by the end of January.: Completed! Finished the last scene of the first draft this morning. The final total is 83,376. A little shorter than I originally planned for, but I tend to under write, instead of over write, so I’ll probably add more in as I read over it. I’m just happy to be finished, even though it was a little difficult to say goodbye to these characters.

Blog at least 3 times a week.: On track here.

Read 1 craft book a month.: Read a bit more of Self Editing for Fiction Writers. Taking my time with it, so I don’t know if I’ll finish it by the end of the month, but that’s okay.

Read 1 fiction book a week.: Haven’t started a new one  yet. I did get my two books in the mail last week, so will probably start one of them soon.

Comment on at least 5 blogs a week: Made a couple comments, probably 2-3. so not the five, but the week isn’t over yet.

RT at least 5 articles a week.: Not sure how many, not 5 yet though I don’t think.

Interact personally at least once a week on Twitter.: haven’t really even done that yet this week. Still have a few days in the week though.

Finish setting up my Facebook page.: Nothing yet. But, I got my page set up for my knitting. Since that’s done, I might be able to put some time on my writer page.

Cut out pop at home: Still doing good with this one.

Attempt to eat healthier snacks: Need to get to the store to get something besides popcorn. But, I’ve been making a large bowl of popcorn and then put it in a different container and eat a small bowl of it at night. Sometimes I’ll grab a handful during the day too. That lasts me about 3-4 days.

Exercise 4-5 times a week.: Didn’t work out on Sunday, but did Monday, Tuesday, and this morning even though the program reminded me today was supposed to be a rest day. planning on doing one more tomorrow, then I’ll rest on Friday.

fallonbrownwrites
Create a free website or blog at WordPress.com.