It’s day 2 of the Word a Day challenge, and today’s word is bravery. I’ve been running this one through my head. Bravery isn’t something I have a lot of. Most of the time I’m an anxious mess.

But, in my opinion, some of the bravest men(and women!) are firefighters, particularly volunteer firefighters. They put themselves into dangerous situations, fires, responding to traffic accidents. And in the case of volunteers, they don’t get anything back for it.

I started writing my Flames series about a group of paid firefighters, and then I spun off that to another series to honor those volunteers. One of those is the younger brother of one of the paid firefighters.

Jace snorted. “I’m no hero, Nolan. I know that perfectly well. I’m just an artist. I’m nothing like you.”
Usually batting around the hero term irritated his brother. Right now, he just looked concerned, though. “Who the hell ever made you think that, little brother?”
“No one ever had to. I know it’s the truth.”
“Your truth is mistaken. You’re no less a hero than I am. Why would you think that about yourself?” He shook his head. “Seriously, little brother. You are an amazing artist, and no one can, or should even try, to take that away from you. But, it’s not all that defines you. You know I hate that hero label, especially since I’m paid to do what I do. How is it heroic to be doing my job?” Another shake of his head, as if none of it made sense to him. “But you? Dad, Tate, Jess. You don’t get paid back for what you put out there. You do it because you want to, because you feel called to it, because it’s the right thing for you to do. Those things might apply to me too, but I get compensated for it. So don’t ever deride yourself like that. Do you understand me?”

A to Z: V is for Volunteers

A volunteer firefighter is one who is not a career firefighter. Apparently in some places, they may even be paid. Not here. In our area, we depend on volunteers. In the city, and some of the larger towns, there are paid departments. But, here in the northwestern corner of Pennsylvania, there are a lot of small, rural towns. Places that can’t afford to pay a department.

As I mentioned in my theme reveal post, my husband is a volunteer firefighter. He’s also the Chief Safety Officer for our department, is certified at Firefighter I, and has many other certifications. He’s one of the few in our department who is also a certified rescue diver. He’s done a lot of training, aside from the twice a month drills at the department. A lot of weekends of him gone most of the day. Dinners where the pager goes off, and he’s up and gone. Every Wednesday night with him gone for either a meeting or drill night. And now he’s started helping out with the department’s Explorer program, which means Tuesday nights with him gone as well.

My husband with his Firefight of the Year Award(this is the traveling trophy. He got a plaque the next year).

Unfortunately, recently there’s been a volunteer slump. We have an awards banquet each Spring. And the Chief always has the firefighters stand by years of service. This past year, there were just a few standing for the 5-10 years and even less in the 0-5 year group. Less and less join up each year. This is becoming more of a problem as the older firefighters step back or down. Like I said, we depend on these volunteers around here. Without them, a lot more buildings would burn to the ground.

I know I’ve mentioned my Flames series a few times through this month. That one is based on a paid department set in a small fictional city in our corner of the state. But, while sitting at this year’s awards banquet, I got the sudden idea that I wanted to write something that focused more on these volunteers. At the time I was just starting to plot out a different story, so I let that simmer in my mind for a couple weeks. Once I finished plotting the other one(a western, actually), I had a few ideas for this new series. Or really, a spin-off from the Flames series. In fact, the first story will star Jace Hunter, Nolan Hunter’s little brother. Right now, it’s going to focus on this family, as they are just about all involved in the volunteer department. I’m really excited to get this one started, but I have to finish Nolan’s first, as the events in Jace’s story kind of springboard off what happens during Nolan’s.

My future firefighter(this is from 2013, but he still has that coat & helmet)

The rest of my week has gone pretty well. I didn’t get much done yesterday as it was the second annual Fire and Ice ball, a fundraiser for one of our local volunteer fire departments. Around here, we rely mostly on these departments. In the city, there’s the paid department, of course, but in a lot of the smaller towns, all we have are volunteers. My husband is one of them(so are my uncle and various cousins), so we always try to support the local departments. It was a good time, even though I know some of the people there probably thought I was bored. But, I like to sit on the edge and observe other people.  A lot more than getting out there and looking like an idiot. And it was a night out of the house and away from the kids, so a nice break.

Before that, we did some shopping in the city. My husband wanted to go to the tool store, and just a few doors down from there is a used book store, so the girl and I went there. I got 4 books and the girl got 1 for $18. Then, when we dropped the kids off at my mother-in-law’s she had some books she was going to get rid off. That was another 19 books. So, needless to say, I’m set for books for awhile(okay, if I only read those & none on the kindle, I’d be set for about a month). 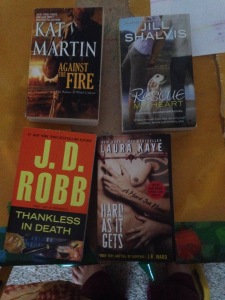