Jonas glanced over as the little form raced toward him. He couldn’t help but smile. “Did the Easter bunny come to your house this morning, Cat?” he asked his niece.

She nodded and thrust something toward him. He took the stuffed dog with bunny ears and grinned. “A bunny dog, huh? That’s just about perfect.” He handed her the stuffed animal back and looked up at the steps coming toward them. He grinned at his sister-in-law.

“Looks like the Easter bunny left you something, too,” he said.

Denise laughed and set a hand on her very swollen stomach. “Not quite yet. Still another month left, though I don’t see how that’s possible.”

Catarina clambered up onto the couch beside him and pressed a kiss just below his knee as she did every time she saw him. “Thanks, Cat. Feels better already,” he said as he did each time. Then, the girl was off the couch and running off to see someone else and show them what the Easter bunny had brought her.

“Isaac was pulling in just behind us,” Denise told him. “He should be in here soon.”

Good. Isaac had been so busy with classes the last week, Jonas had barely seen his boyfriend. Then, he was right there, a bunch of lilies in his hand. “Flowers?” Jonas asked. “For me?”

“Nope,” Isaac said after a long kiss. “Brought these for your mom. Just couldn’t wait for this.”

Good because Jonas had been doing enough waiting. He grabbed the cane beside the couch and levered himself up to his feet. Walking on the prosthetic was getting easier at least. Isaac stepped in right beside him, and they walked toward the kitchen together.

This week’s Stream of Consciousness Saturday prompt was to use bun either as part of a word or as a word on its own. Since it is Easter weekend, I figured a little piece of these characters during Easter worked well. I hope everyone that celebrates has a good Easter.

I hope everyone that celebrates had a wonderful Easter last weekend. Ours was pretty good. We ended up not coloring eggs this year. We didn’t have any in the house at the end of the week and didn’t feel like running to the store for just eggs. Neither of the kids seemed to know the difference and the Easter bunny was going to be hiding plastic eggs around the house anyway(so he didn’t have to worry about the early rising kids in the house waking up before he got here;)), so I didn’t worry about it too much.

We had to put out a snack of carrots and water(since Hayleigh thought he would need a drink to go with his snack). And he left the Easter baskets sitting right out on their coloring table. Sunday morning, Hayleigh comes running into our room, “Mommy, come see what’s on the coloring table. What the Easter bunny brought me.” It was so cute seeing how excited she was. 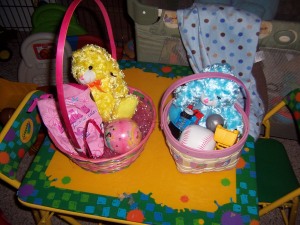 Easter baskets for the kids

The Easter bunny was pretty nice about hiding the eggs as well. Most were “hidden” in plain sight. Must have been thinking about Nathan when they were hidden. Although he was more interested in opening the first one he found and seeing what was in it than finding any other eggs. 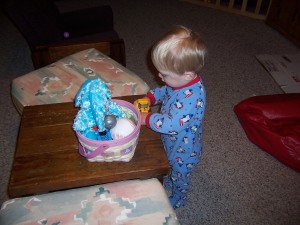 Checking out his Easter basket 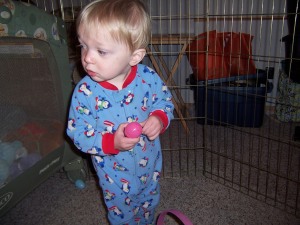 Carrying an egg around 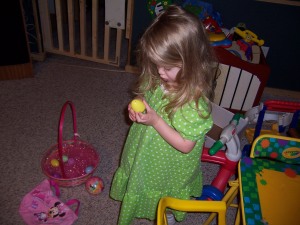 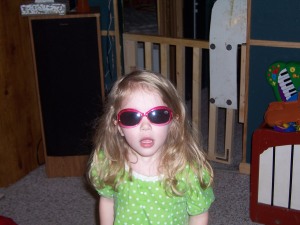 Showing off her new sunglasses

Sunday afternoon we went to Cory’s aunt’s for Easter dinner. Ham, scalloped potatoes, corn, carrots, and strawberry pretzel dessert(YUM!). And an egg hunt for the kids a little later. It was a good time. 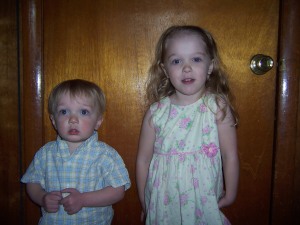 All dressed up for Easter 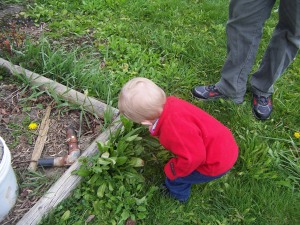 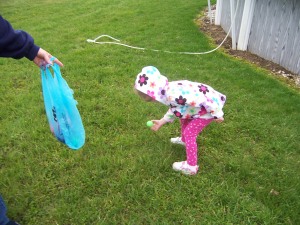 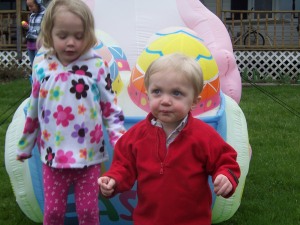 Standing in front of a large inflatable Easter Bunny

Last Tuesday, before starting their Easter break, Hayleigh brought home her third quarter report card. The only thing she “needs improvement” with, other than interacting with others, is recognizing words that rhyme, producing rhyming words, and writing her name with proper formation, all of which has improved over the last month or so.

Academically, she’s doing great though. She can identify all 8 colors, 6 out of 6 shapes, recognizes 11/11 numbers and can point and count at least 15 objects. And she counts up to 100 even though the end of the year goal is only 20.

She identifies 52/52 letters and recognizes 25 out of 26 letter sounds. She also recognizes name in print, can sing ABC song, Repeats rhymes/poems, can hear and combine letter sounds, and can count the number of syllables in a word(she is always having us clap the parts of words at home).

Last week, I talked about the project I had screwed up and had to unravel a few hours worth of work. Well, I finally finished it on Thursday. It did turn out well, although I am not completely happy with the seaming job on the sleeves. That is one area I always seem to have problems with. But, it still turned out to be a cute little sweater. 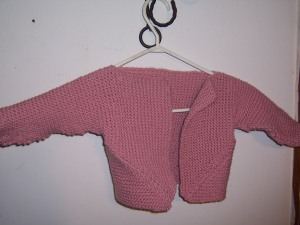 After I finished that, I started on another Easter idea. I found this pattern on ravelry and thought that by changing the color of the yarn used, I could use it to make chicks and ducklings. It did not take me long to finish the first one, only about a total of five hours. But, I’ve only been working on it while Hayleigh is either at school or after she goes to sleep. Otherwise she wants to know what I’m making and who it is for. And since these might end up in the kids’ baskets for Easter, I didn’t want to have to deal with that. I got the second one started too, but haven’t got much finished on it. And have not taken any pictures of the first one yet. Once I finish this one, I have another bunny pattern that I’m going to try out. And that should be it for the Easter items.

You can always check out my other items at my Etsy shop or on my Facebook page.

Last week, I posted about a pattern that I had started but had not finished yet. Well, I did finish it Monday night. It turned out pretty well. I think I got the legs on a little crooked, but that would be easy enough to fix. 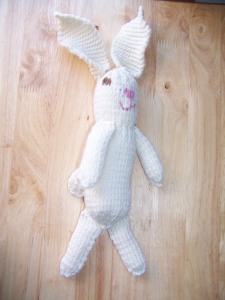 After I finished that one, I decided to start something a little more in depth, so picked the Triangle Cardigan, another pattern from Lion Brand Yarn. I knew it would take me a bit longer to make than these other projects had but wasn’t figuring on more than a week. Of course, I would be closer to being finished with it if I hadn’t realized Saturday night that I had screwed up. When I picked the stitches back up for the back, after doing the right and left fronts, I started on the wrong side. I did not realize this until I was halfway through the back. So, I had to rip out all those stitches, which had been about three or four hours of work. I spent yesterday trying to get back to where I was when I realized the problem. Pretty much there now, but this is definitely taking me longer than I had figured on. Once I finish it, I’m planning on doing a couple more quick projects.

Knitting Monday: Getting Ready for Spring

I wanted to make a spring hat and found this pattern on ravelry for a lacy newborn hat. I figured using cotton for it would give it the lightness perfect for a spring/summer hat. I had a little trouble with it at first as it was the first time I had knitted a hat from the top down. But, I think it came out pretty nice. 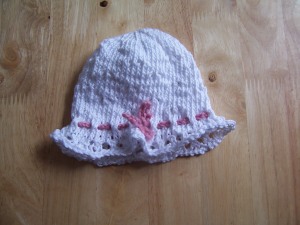 Last week I decided to start working on some items for Easter. The first one I did was the Knit Little Lamb from Lion Brand Yarn. Finished it on Friday. It only took me about ten hours to finish.I didn’t use the yarn the pattern called for as it’s about $9 for 87 yards of it. And I figured any worsted weight yarn(which I have plenty of) should work. 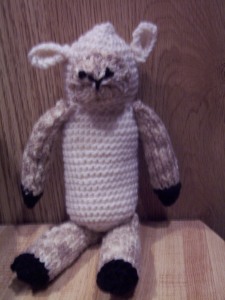 After I finished that, I started a similar pattern, this one for a bunny. It called for the same yarn, but once again I just used some worsted weight that I all ready had on hand. Not quite finished with it yet, just have the body, ears, and one leg finished. Hoping to get the rest of it done and assembled today or early tomorrow.