Four more days until I have a child in the double digits. And we’re having her birthday party today. Yesterday we had to take the dogs to the vet in the morning. Then, the motorcycle club we ride with had their annual ride benefiting a local oncology clinic. So we helped with that, went on the ride, and stayed for the after party. They also do a pub crawl, but we had to come home and start getting ready for the girl’s birthday party. It was a beautiful day, if a little chilly with the wind. 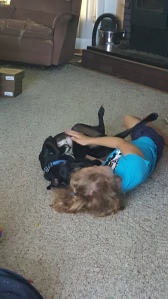 She gives him belly rubs, he gives her kisses.

After we got home, I made two pans of zucchini bread and the cake starting at after 8:30 at night. This morning I need to finish cleaning things up(including putting rest of groceries away-I only worried about the cold stuff when we got home Friday night), decorate the cake, and get the rest of the food ready(which is pretty much putting out bags of chips and the fruit and veggie trays we bought the other night).
The week itself has gone pretty well for me.

WeWriWa: “Through a Minefield”