I had a pretty good week. Okay, really good. And I met my Camp NaNo goal on Friday! Obviously I’ll keep writing through the rest of the month. And next. And the one after that. 😉

Yesterday we had our family reunion with my husband’s family. It was at an amusement park down in Altoona. We weren’t too sure if we were going to go, it’s a three hour drive for us and it was supposed to rain. We did end up going, though. And it did rain. Pretty hard at one point. 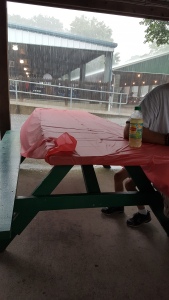 Thankfully we were under a pavilion at least. We ate, played some board games

(and I wrote a little bit in a notebook), and when it finally cleared up, we rode bumper cars and since we had a few extra tickets, the kids each went on another ride.

When we finally left, we went up through Clarion, which is where I went to college. So, we decided to stop at the Chinese restaurant we used to go to every time my husband came down to visit me. And then I got this fortune:

We stopped to get groceries on the way home. It was late, though, and the kids had already fallen asleep in the truck so my husband stayed in the truck with them while I went in to get the groceries. I also figured I’d grab birthday presents for the girl since she wasn’t with me. Her party’s in 2 weeks, so it’s good to not have to do it at the last minute.