We had parent-teacher conferences for the kids this past Thursday. We went to see the girl’s teachers(3rd grade) first(they switch in the afternoon for math/science/social studies). Both teachers basically said she’s wonderful to have in class. And very smart. We also got report cards that night. Her lowest grade was in math(and that was still in the “approaching proficient” range). Her writing grade was only a little higher, but her teacher said she was even excelling at that. They only expect in the 70s at the point across everything they grade for on the writing assignments, she had an 80 for one and in the 90s for conventions. Everything else(reading/vocab, science/social studies, word study) was in the “advanced” range.

Then, we went to the boys’ classroom(kindergarten). His teacher had wonderful things to say about him, too. He scored proficient in most of the literary things, though he needs to work on reading comprehension a bit. Proficient in all the math areas for the first grading period, and consistent in all the learner qualities(self-directed learner, quality producer, collaborative worker, respectful citizen). He still gets a little confused between what an author and illustrator does, but he knows most of his sight words so far. She also went over his DIBELS testing(early reading skills assessment). The goal for September for First Sound Fluency was 10, he scored 18 and is now at 48. For Letter Naming Fluency, September’s goal was 8. He scored 36. He hasn’t shown a lot of interest in reading on his own(his sister was already reading early chapter books by his age), but it really does seem to be a lack of interest and not ability.

Yesterday the kids went with my mother-in-law to see the Trolls movie. While they were gone, we went to the mall and found they have an ‘as seen on TV’ store. I found these stacking spice racks in there. Unfortunately our cupboards are weird, so I can’t stack them in there and still have any room for the spices. But, it did help organize the cupboard a bit. It was bad before. In fact, I found 3 opened crushed red pepper, 2 garlic powder, and 2 garlic salt containers.

these were all in the cupboard

what happens when you can’t see what all you have 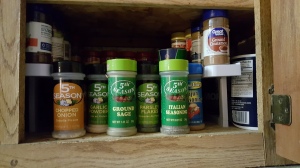 We also went to the used bookstore(well I did, well husband went next door to the tool store). I took back a bunch of books and got 3 more. I had to be careful since I just sent my Christmas list to my mom last weekend(she says I’m hard to buy for. All I ask for is books. *shrugs*).

As for my progress for the week, it’s gone well, especially the writing:

It was a pretty good week for my goals overall. Hopefully next week will be as well.