The day is here. Adrian and Kayla have finally been released into the world. I’m very excited about this one. And nervous. I hope everyone will enjoy it. 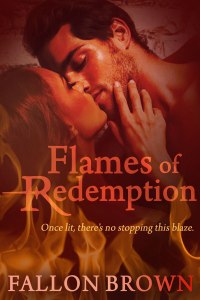 You can add it to your goodreads

Or purchase at: Amazon| B&N| Kobo

Once lit, there’s no stopping this blaze.

Kayla Brooke has firefighting in her blood. She followed her father’s footsteps into the Crystal Glen Fire Department, but when she shows an interest in the whys, she moves into her uncle’s path; fire investigation. Fighting the flames has cost her: a man she thought she’d loved and friends taken by the flames that call to her. After her fiance walked out on her because he could handle what she was, she never expected another man to light a different kind of fire in her blood. Until Adrian Riley ran into her life.

Adrian Riley came from a family of cops, but he decided to start over in a town where no one knows his family. Now, on the fast track to promotion, he thinks this new case could be the key to proving himself. Then, he butts heads with a hotheaded firefighter on the scene, and his whole world turns upside down. She could be the key to everything, or the one weakness that could take him down.

They fight the sparks that threaten to burn them both. But, once they light, there’s no stopping the blaze. Kayla’s been burned before, but this time the flames may consume her. When more fires start, they know it’s more than a simple case. But, when the arsonist seems to have turned his attention to Kayla, Adrian will do everything within his power to keep her safe, even stand between her and the fire.

This was a mistake. It would blow up right in their faces, and she wasn’t sure if either of them would survive the blast. She had never run from the things that scared her before.
Kayla released the doorknob. “I feel it,” she said, swallowing down her fear and turning toward him. “I’ve felt it ever since I saw you standing on the other side of the funeral home. Maybe since that day on the street. It pissed me off, and it terrified me.”
He had started to raise his hand to touch her face, but her words seemed to stop him. “Why?”
“I felt like this once before, drawn to someone. He thought that meant he could tell me what I could and couldn’t do.”
His face went hard. “Did he hurt you?”
“No, not like that. He wanted to keep me under his control. When I wouldn’t buckle to his demands, he walked away. I felt so used. I got over him, but I’m not going to trust this pull is enough.”
“Of course, it isn’t,” he said, finally stroking her cheek. “There’s more to it than that. I know you can feel it. It’s not just some pull. There are sparks. It’s a damn spontaneous combustion. It’s not going to go away until we burn it out of our systems.”
She struggled to breathe. Is that what she’d hoped for in coming here, to get this out of her system? She knew it was, even though she would never admit it out loud. “Do you know what happens when sparks contact an ignition source?” she asked, running her hand up his chest and looking up into his eyes.
“I’m guessing that’s firefighter speak for ‘things go boom’.” He pulled down the zipper of her coat then slid it away from her arms.
“Incendiary,” she murmured.
“Hot.”
He ran a finger down her neck. She could feel the quiver all the way down to her stomach, which clenched as his touch moved down the shirt, between her breasts, barely brushing the sides of them.
“Adrian.”
“Shh. I’m concentrating here.”