I finished the Snowtracks Cap I was working on last week on Thursday. It turned out pretty nice. The cabling was not really complicated, but it still looks nice. That one took me about 13 or 14 hours to finish. 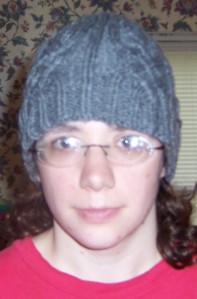 The picture is not the greatest, but I was trying to take it of myself and tried cropping out all the background stuff(or what I could).

On Friday, I decided to knit another hat for Nathan to keep the sun off his head. I had some blue cotton and figured the cotton would make a nice spring/summer hat for him. And I knit up a beanie with a broken rib brim. This one was a really quick project. Only took about five hours, maybe a little less. Was able to finish it over two days. And he actually kept it on. At least for a little while. 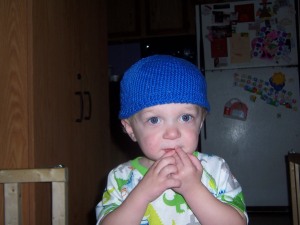 He did wear it outside Saturday, and his head did seem to stay cool when he had it on. Now, I’m just starting to cast on for a Spring hat for Hayleigh. I’m going to attempt this Spring Toque for her. Hoping the largest size will fit her, either that or cast on more stitches to make it bigger. The casting on for the ruffled brim may be what takes the longest.

Short Tuesday: In the Moonlight